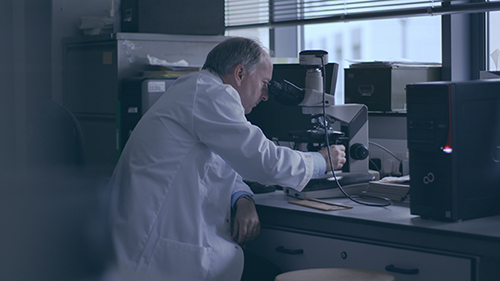 Bittersweet is an award winning documentary directed by Hugh Rodgers and produced by both Anna Rodgers and Zlata Filipovic of Invisible Thread Films. The film captures the Irish health system’s fight to treat the rising number of diabetic patients, and warns against this troubling epidemic facing our population. It follows the personal stories of young people who are living with diabetes and their daily struggle to manage it.  Over the course of the documentary, it highlights the ground-breaking research and development in pharmacology and biomedical science at NUI Galway and other universities to treat diabetes, capturing the important work of CÚRAM’s Professor David Brayden and his team at UCD’s Veterinary Hospital, where they are developing new ways of delivering insulin to the body.

The documentary also gives an insight into the treatment and management of diabetes featuring expert clinicians Professor Derek O’Keeffe and Helen Burke from NUI Galway, who use cutting edge technology to care for young people with diabetes, helping them to manage their chronic condition, through diabetes clinics at Galway University Hospital.

Hugh Rodgers is an award-winning Director based in Dublin. In 2016 he directed The Story of Yes, a documentary on the marriage referendum, and it went on to be nominated for Best Single Documentary at the Irish Film and Television Awards (IFTA) 2016 and was commended at the prestigious Radharc Awards 2016. His work is notable for its emotive quality, finding the personal and engaging stories even within the most unexpected of topics.

Anna Rodgers is an IFTA award winning director and producer, and has worked in documentary film and television for over 16 years. She won Best TV Director at the IFTAs, 2014 for her sensitive portrayal of sexuality and disability in the RTÉ documentary Somebody to Love.