CÚRAM is committed to technological innovation and understands the societal benefits that come from the translation of such research. As part of the translation agenda, one of the CÚRAM projects focused on translation is investigating the impact orientation of principal investigators (PIs) undertaking publicly funded research in the medical device sector. While there is a growing body of empirical research on PIs, little is known about how PIs understand and conceptualise research impact, beyond the outcomes traditionally associated with academically focused research projects (i.e. scientific and economic outputs). However, as a key actor in the translation of research, the PI plays a vital role in bridging the translation gap (also sometimes referred to as the outcome-impact gap) and enhancing the potential broader impact of publicly funded research on society.  Addressing the translation gap is of particular importance in the medical device sector, given the vast potential of clinical and translational medical device research to positively impact patient care and patient quality of life. The Principal Investigator Impact: Research in Medical Devices Project is exploring this knowledge gap.

We are using an innovative ecological approach from social sciences to conceptualise and map research impact and the micro- to macro-level stakeholders involved throughout the medical device translation process.

This phase explored PIs of medical device research’ impact orientation through qualitative semi-structured interviews. Data was gathered on how impact is defined, understood, and achieved.

This phase builds on a body of research that has been pioneered by members of the PI Impact: Research in Medical Devices project team in the fields of entrepreneurship and innovation that has focused on many aspects of scientists in the principal investigator role. This is an individual level study exploring principal investigators’ experiences, attitudes, behaviours and actions with respect to impact. The survey is not an examination of the wider organisation or institute that the PI is affiliated to, but an exploration of the personal perspectives of PI’s in relation to impact.

The PI Impact project team are in the process of disseminating two surveys to PIs, one aimed at an international cohort of PIs of medical device research, and a second survey to a full population sample of PIs of Irish publicly funded research. Results of these surveys will inform future professional development materials and supports for early career researchers and new PIs, to help them to enhance the impact potential of their research. We also plan to publish results of these surveys in peer-reviewed academic journals.

The PI Impact project team are currently offering professional development workshops to researchers on Becoming a PI and Planning for Impact. These workshops are focused on sharing practical insights into the principal investigator role and how med-tech principal investigators approach and plan for impact, and how researchers can plan for impact with the PI Impact Planning Toolkit.

The Becoming a PI: Planning for Impact Toolkit (to be released in October 2002), alongside a number of academic publications, including a White Paper on Preparing Scientists For The Principal Investigator Role And Impact In The Medical Device Sector.

For more information on the PI Impact Project, contact brendan.dolan@nuigalway.ie 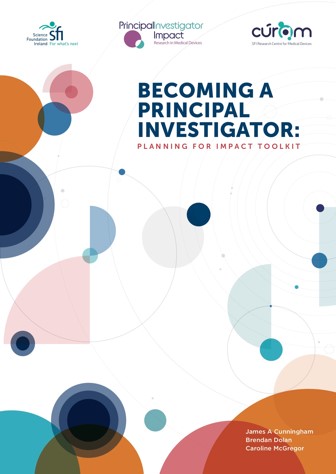